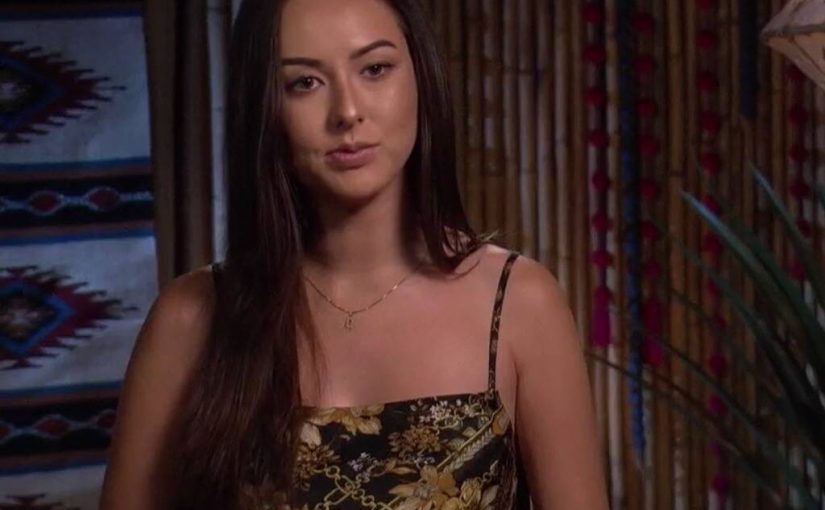 The episode opens with [soft, tense music] just before the third rose ceremony. With 9 guys and 14 girls, it’s the largest number of girls going home so far. Abigail summarizes this for the camera, and says a lot of people are really nervous.

Thankfully, the bizarre hypocrisy of last week when everyone called out Chris but not Brendan is somewhat rectified. A small group, led by Joe, confronts Brendan, who denies things and blows them off. But ultimately, he and Pieper leave, blaming the environment.

There’s an extended scene of Maurissa playing a whipped cream game with Riley. He picks a body part out of a bowl, and that’s where she licks whipped cream off of him. Including his toe. Despite that deliciousness, they end up in the Boom Boom Room.

Thomas tells Tammy he’s more interested in Becca. Tammy tries to convince him to stay with her. Tammy is a great feminist role model. Tammy has a meltdown and says it’s the worst birthday of her life. Last year she got COVID on her birthday, yet she says this is worse. Tammy is a great public health role model.

Everyone sings Happy Birthday to Tammy. Abigail is next to her, singing along. I wonder if she can sing in tune. I’m always self conscious about singing the HBD song ever since I found out it has a tune (duh, I know!).

Natasha is given a rose to make up for her shitty experience so far.

Abigail says she’s super grateful for where she and Noah are. When he offers the rose, he says, “You’ve been the surprising little butter to my toast and I’m excited to see where this goes.”

“That was cute,” Abigail tells him.

To the camera, Abigail says, “There was drama, tension in paradise. We were able to survive up until this point and just focus on our relationship.”

The four girls who leave are Tammy, Demi, Jessenia, and Deandra.

The new celebrity host is Lil Jon, who has grills. Not only do I find that unattractive, but I would imagine that makes it difficult to lipread!

The first new guy to show up is Blake from Clare’s season, who might be the cutest guy on the beach so far. He picks Tia for an off road vehicle date. The best line of the night goes to Tia, who says, “If it doesn’t make your vagina dance, it’s not worth it.” Needless to say, she confirms that her vagina dances when she’s with Blake.

Kenny and Mari think they’re leaving BIP together. They go to the Boom Boom Room to cement it. The gross thing is Maurissa has been leaving her stuff in there. Has the bed been cleaned in between visits? Gross!

The second new guy who shows up is Dr. Joe, who picks Natasha. They have a dinner date with the largest margarita goblets I’ve ever seen. Everyone wants Natasha to have a good date after being screwed over by Brendan. But the producers have a trick up their sleeves. They gave Natasha a rose, only to bring in Brendan’s best friend. Sure enough, once he finds out what happened, he loses interest and stands by his friend. Jerk.

Abigail and Noah are called out a couple of times during the episode for being one of the established couples. One time they’re shown kissing on a hammock or bed, but multiple (different) times, they make out in the pool. One time Abigail even has something sticking out of her mouth, and Noah leans in to grab it with his mouth. Another time, there’s a scene that almost looks sexual.

Looks like they have their mojo back! And hopefully they no longer have pruned skin from all that time in the water!

Joe sets up an evening picnic for Serena, and they admit to each other that they’re falling in love. Joe’s ex Kendall is stupidly sitting where she can see them, and finally walks away.

The final scene has Aaron listing facts from his stay on BIP. One of them is, “When it comes to Noah, Noah doesn’t no-ah when to shut the fuck up. Fact.”