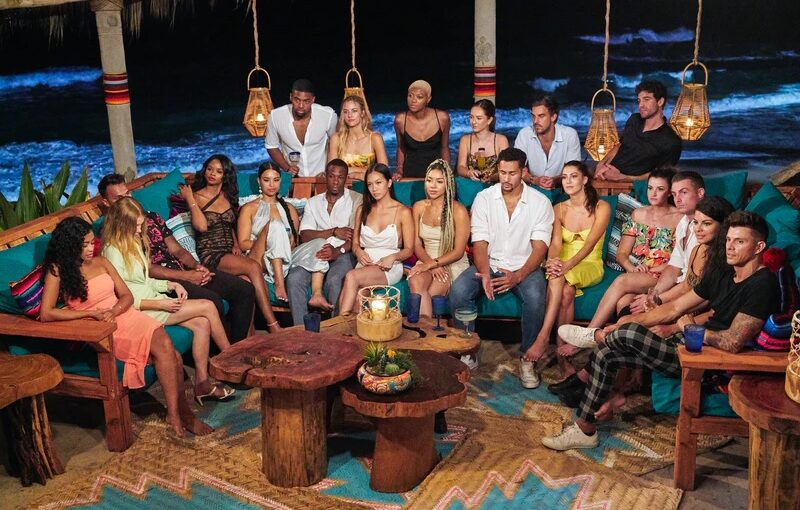 Noah opens the episode narrating the Joe, Serena, and Kendall situation. Joe and Kendall talk and discover they’re on different pages. Actually, Kendall’s in a whole other book. She displays some smarts by realizing she can’t torture herself anymore, and leaves Paradise.

Becca lists the solid couples, including Abigail and Noah (still) – shown in the pool (still).

Two guys arrive: Demar and Ed. They ask Chelsea and Natasha on dates where they paint each other.

Meanwhile, Noah surprises Abigail with a date. He gives her a piggyback ride and says, “Remember when I told you we’d get a hammock and margaritas?” I wonder if she was able to understand him or if she didn’t get it until the reveal. She tells him she’s very impressed.

Noah tells the camera it’s a week for serious conversations. There’s a lot he and Abigail have to talk about. They haven’t told each other that they’re falling in love. Don’t get your hopes up; if they have a serious conversation, it’s not shown on air.

Kenny gets a date card and takes Mari on a cooking date. The chef says presentation is the most important. The plating will be their bodies. So they eat tacos off each other’s naked bodies, sour cream running down legs and all. It’s every bit as gross as you’d expect, though to their credit, they don’t seem to be inhibited by the chef’s presence.

Serena lists the serious relationships, as if we haven’t heard this a million times already.

Then, even more drama! Instead of a rose ceremony or cocktail party, everyone has evacuate because a dangerous tropical storm is approaching. While the crew is notifying everyone, Abigail’s about to eat a French fry and stops it in midair. Thus, a meme is born.

Everyone’s super dramatic. Oh no, Paradise could be shut down for good! I don’t know when I’ll see X again! Civilization will cease to exist! My brain cells will atrophy!

Spoiler alert: No one dies. They all return to Paradise, which is still standing. Despite the daytime, they have an hour to get ready for the cocktail party. With 8 women and 12 men, four guys are going home.

There’s a quick glimpse of Noah who’s wearing even more gold necklaces. Abigail’s seen wiping something off his face while they’re in a hammock, so clearly they’ve reached the old married couple stage of the relationship.

Tia is torn between James and Blake. One gives her the attention she craves, while the other makes her vagina sing. What’s a girl to do?

Aaron walks down a makeshift runway for Chelsea, the runway model. She admits she likes him more than Demar. But then Ivan, desperate for a rose, pulls her aside and they end up vibing. And by vibing, I mean kissing. Aaron won’t have this. He calls Ivan a desperate little bitch boy and calls him out for saying he wasn’t trying to take someone else’s rose. There’s face to face yelling, which we’ll see more of next week in a “three hour extravaganza.” It’s not even the finale, which is the following week. This show…