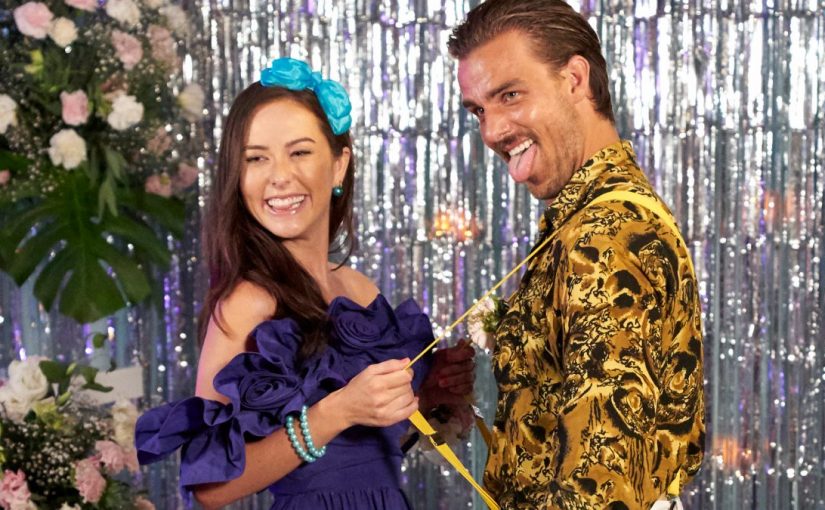 The prom-goers get suspicious when they realize they haven’t seen Noah and Abigail in a while. That’s because they’ve been busy breaking up!

When Abigail finishes her crying jag in the bathroom, Noah asks if they can at least finish chatting and puts his arm around her shoulder. She takes it off. He says he wasn’t trying to blindside her. She asks why he waited until now. He explains that part of the struggle was that he wanted it to work out.

Finalllllly, Abigail tells him that she was actually planning to tell him she was falling in love with him too. He pushed her to open up, she says. “Like, that [bleep] hurts!”

“At the end of the day, I wasn’t your person,” Noah says. Abigail responds, “You’re right. You’re not my person. I kind of just want to forget about this and just…move on.” She’s emotional and puts her hands over her face. When she says, “I don’t want to do this anymore,” she must not have been speaking clearly because subtitles are provided on the screen.

The drawn-out drama ends when they hug goodbye. Noah leaves Paradise with dramatic music and no regrets. He denies having lied to Abigail and calls their time together fun and effortless. They were great, but not each other’s soulmates, he adds.

Abigail, meanwhile, returns to the prom where she tells Chelsea that she and Noah are going home separately. Chelsea, Serena, and Mari (Abigail’s friends from Matt’s season) console Abigail as she tells them what happened. She calls out Noah for getting to walk out of BIP without having to face anyone. Abigail feels humiliated. Serena says Noah should be, and Mari reassures her that she did nothing wrong. They all wonder why Noah waited until the end of Paradise. The girls are mad on Abigail’s behalf.

Abigail leaves the prom and walks up the stairs barefoot. Serena reels from the news, because they’ve been attached at the hip the whole time and she can’t imagine being at Paradise without her.

In the car, Abigail says she’s numb and it’ll take some time to process everything because she was blindsided. “That’s what hurts the most about all of this is he was the one to say he was falling in love and for him to just give no indication that anything was wrong or having doubts, it fucking hurts,” she says. “Why would he get me all happy and excited just to take that away from me?”

Abigail’s theory is that Noah is scared, which is causing him to hold back and use his gut feeling as an excuse. She knows she can’t convince him to stay with her and work it out; he needs to figure it out on his own.

Word spreads about the breakup, leaving everyone in shock. They were all inspired by a relationship that started on Day 1, but now they’re scared because if a couple doing that well can crumble, what does that mean for them? Thomas calls Abigail one of the sweetest people he’s ever met. Joe calls the break up a reality check for everyone.

The breakup remains the topic of conversation for a while. Serena and Mari fill Wells in on the drama. Mari says you never know what’s going on in someone’s head, which is why you need open and honest conversation.

The rest of the episode is predictable. The cocktail party is cancelled, couples have serious conversations about whether they want to stay together, continue on to the Fantasy Suites, or even possibly get engaged. I still don’t understand why it seems to be an all or nothing choice. But several “couples” break up, yet a new couple leaves Paradise together: James and Aaron, BFF Forever. That part is clearly staged but hilarious.

The three remaining couples are Riley and Maurissa, Mari and Kenny, and Joe and Serena. They all have Fantasy Suite dates, which basically means they get alone time without cameras. You know what THAT means! We’re treated to an unnecessarily graphic preview before they close the doors.

The remaining six people all say ILY to each other. They all get engaged. But before Joe proposes to Serena, his ex shows up to talk to him. Totally unnecessary producer manipulation and a time filler.

In the end, we’re provided with some cast updates. Two couples got back together after BIP, including Abigail and Noah, who are now “taking things SLOWLY!” Um, how much slower could they get?

Abigail posted a video montage on Instagram (which I can’t share because it’s a Reel), with the caption, “I love you, @noah_erb.” Looks like they’ve made lots of progress, though I wonder how they got over what he said to her. Hopefully this match made in reality TV heaven will last…

And now we know deaf people really can do anything – even survive a break up on national TV!