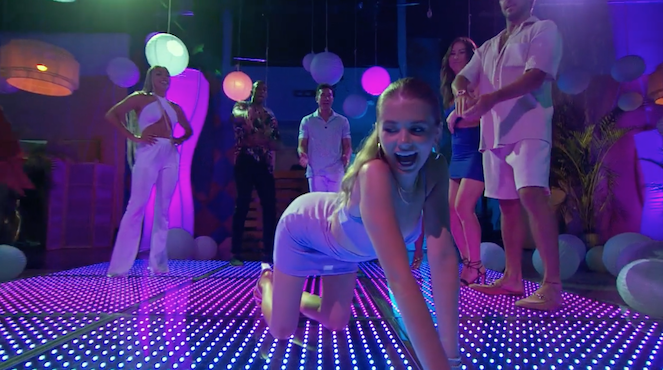 Someone asks Noah — who’s hanging out with some of the guys — if he and Abigail are a thing. Noah confirms this, but says it could be better; they have to work out a couple of things. “You sound thrilled!” someone notes. “I just woke up, buddy,” Noah replies.

When he’s ostensibly woken up a bit, he tells the camera how happy he is that the guys have the roses. He’s feeling good, and he and Abigail are doing great.

The new celebrity guest host is Tituss Burgess, who announces that he’s throwing a special VIP party that night, with only a few from the group invited – a “tit-ass party.” All the guys are included, and only some of the girls, like Abigail. Some girls were clearly invited to create drama.

Abigail walks in on Noah’s arm to a room that’s decorated like a club, with a dance floor that’s lit up. There’s a shot of Abigail happily dancing. Thankfully, Noah doesn’t talk to any of the new girls.

Of course there’s a twist. Tituss says there will be other guests, who might be recognized. All bets are off; if anyone makes a connection with one of the new VIPs, they could potentially join the house. Four women enter: Chelsea, Alana, Alayah, and Mykenna.

Chris blindsides Jessenia by going for Alana. She catches them kissing in another room. Abigail consoles a sobbing Jessenia (and at the beginning of the episode, she wipes glitter off Mari’s face – the friend we all need and want!).

The VIP party continues with a surprise concert by Olivia Holt, an “acclaimed singer/actress.” That description seems like a stretch. Chris and Alana make out in full view, causing everyone to feel bad for Jessenia and annoyed with Chris.

The next morning, Alana shows up at the house and asks Chris on a date. Chris is told he should talk to Jessenia before he leaves. Abigail is sitting with Jessenia when he approaches. I noticed her eyes were always on who was talking. Jessenia tells Chris that she has nothing to talk to him about. “Badass,” Abigail tells her when Chris walks away.

Chelsea joins the house. Everyone remarks on how stunning and super tall she is. Abigail is laying next to Noah and smiles at her. Becca asks Serena, “You know her the best. Who do you think she’ll pick? Who’s her type?” Serena says that Abigail’s probably the better judge of this. She moves so she’s in Abigail’s line of sight and repeats the question to Abigail, knowing she probably didn’t hear it. Abigail says Thomas, but Chelsea picks Aaron. They go horseback riding on the beach and then have a picnic and make out.

Tammy’s happy and secure with Thomas but worried about being blindsided. So guess what happens? She gets blindsided when Becca gets a date card and picks him. They have a dinner date that ends with mariachi music. Thomas says all the right things, Becca’s a “smitten kitten” (groan), and they kiss. When they start dancing, Becca says, “Oh my god, you’re so tall!” That must have been like foreplay for Thomas!

Meanwhile, Joe has been suspicious of Chris, who had asked how to get followers. Jessenia says Alana has talked about this before too. When Chris and Alana return from their date (where they went ziplining and had a badly choreographed make out session), Joe appoints himself as judge, jury, and executioner. He grills Chris, calls him on his BS, and says he should leave. Jessenia flat out asks him to pack his bags and leave. Chris and Alana look shell shocked but ultimately leave – in separate cars.

This whole thing is bizarre because it’s similar to Brendan and Pieper, only they’ve been all but ignored. Brendan and Pieper were more blatant in their strategy for clout. Perhaps it’s an editorial choice to give them little airtime after they were unmasked. Hopefully next week, they’ll get their comeuppance as well. 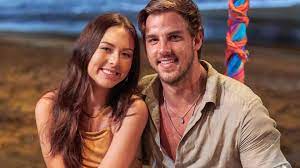