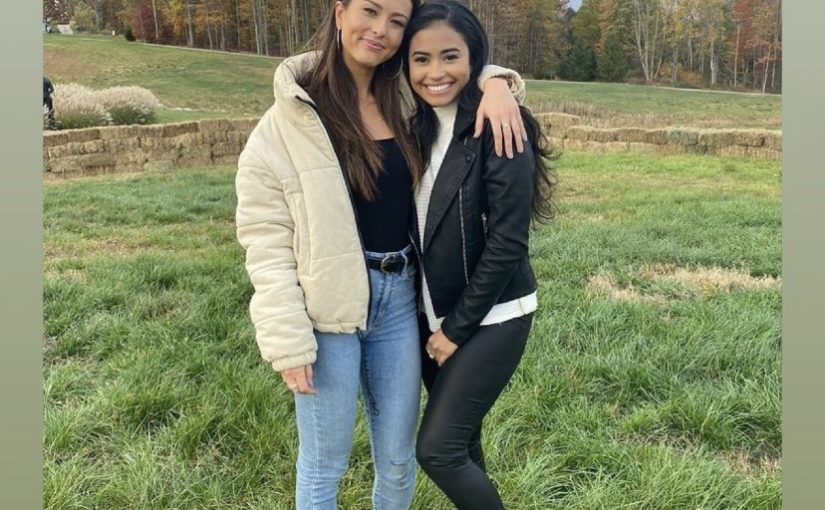 I stopped watching The Bachelor a long time ago, but got drawn in again because of the first deaf contestant, Abigail Heringer. I wrote about the first episode of Season 25 for HearingLikeMe.com.

As long as Abigail is on the show, I’ll blog about her here. Future posts will go up on Tuesdays.

Abigail doesn’t get as much air time in week 2, but she stands out in her scenes.

Shout Out From Chris

The second episode opens with Matt James’ [running footsteps] and [tranquil music] as he gets some necessary exercise. After all, he has to keep his stamina up if he’s dating multiple women. But first, he must indulge the viewers in a gratuitous (outdoor) shower scene. It’s so natural that he even wraps a towel around his waist and goes back in the house without drying himself off.

In their house, which they jokingly refer to as the Matt-eau, the girls are all sitting around when host Chris Harrison walks in. “Where’s my girl Abigail?” he asks. “I’m over here!” she says. “Oh, you’re tucked in the corner,” Chris says. “You got the First Impression Rose! Congrats!” One of the women adds, “And she got the first kiss!” “Congrats on both of them!” says Chris.

Hmm. And here I thought Chris was looking for Abigail to make sure she’d be able to lipread him. But no, he’s here to announce that there will be three dates this week: one group date, and two one-on-one dates.

While Bri is on the first 1:1 date, there’s a knock at the door back at the Matt-eau (yes, it’s as painful to write as it is to say). This is always a signal for the next date card. I, of course, wondered how Abigail was clued in. Ileana reads off the names of the girls going on the group date. And the names keep coming. There’s a total of 18 women going on this date, the largest group date in Bachelor history. <sarcasm> Naturally, Abigail is one of them, because it’s an ideal environment for a deaf person. </sarcasm>

What’s that sound? Fireworks popping outside. Again, who tells Abigail (or can she figure it out for herself?)? The women go outside to watch and muse that Bri and Matt are probably making out. How’d they guess?

One women thinks the group date will be a s%*t show. She’s right. Because all the dates have to be outside for some reason, they carry umbrellas as it’s raining. Good thing the show has enough, because cochlear implants shouldn’t get wet. Some are water resistant, but I don’t know what brand Abigail has.

Matt tells them that he’s confident he sees his potential wife in the group. Since he’s a visual person, he thought it would be fun to have a little photo shoot and visualize what that special day might look like with one of them. Right. He thought this, not the producers. Anyway, the women have 10 minutes to put on one of the wedding dresses and accessories inside. Maybe half of the group gets a photo taken with the groom, and some even get kisses in while the others watch. The whole thing is every bit as cringe-worthy as you can imagine.

Then Chris shows up. This always means a twist. He says to stay happily married takes a lot of hard work. Matt is looking for a woman who will truly fight for him. So even though half of the girls didn’t get a photo shoot, they all have to walk through a forest to meet up with Matt again. Is Abigail able to follow when Chris explains the game was Capture the Heart?

The women are split into two teams. There’s paint and other “weapons” like purses, and no rules. As the women discuss strategy, I wonder if Abigail is keeping up. How does she feel during the competition? She probably can’t tell as well as the others if someone is approaching. Is she worried about her CI coming off? When water is sprayed, what does she do? When the camera pans to her in a group shot, she isn’t looking at the person speaking. Was she relying on her hearing, or did she figure it doesn’t matter?

Alas, Abigail’s on the losing team. The wedding dresses get trashed. The winning team spends a “romantic, incredible night” with Matt, while the losers go home and “wonder who’s making out with Matt.”

Back at the house, the losing team tells the women there what happened. Abigail and her paint-splattered face starts it off, “Well, the red team won…” Later on in the conversation, as one person is talking, the camera pans to Abigail, who’s looking down. Is she following the conversation? Does she care?

Abigail tells the camera that going into the rose ceremony, she’s really really nervous. She’s excited to see Matt because she didn’t get to talk to him much this week after getting the First Impression Rose. “That’s why I just really want to talk to him and just kind of let him know that I’m here and hopefully keep that connection going,” she says.

She gets the first conversation with Matt (at least, that’s how the editing portrays it). They tell each other they’ve missed each other and how it feels like they haven’t seen each other in forever. She says they had such a good first night and then there was the group date, which is hard when you’re trying to date the same guy.

Then Abigail does something clever. She tells Matt she should give him a little signal – like she can fix her earring or pull her ear, and it’ll be like her blowing him a kiss or something. He can do it right back, she says. “Or I’ll stare at you the whole night and wait for you to catch my eye,” she adds. They work out their signal and it’s very cute.

Matt tells the camera that Abigail is one of the sweetest people he’s ever met. He doesn’t have to try hard to have a good time. The conversation flows and she makes him laugh. He helps her off the couch when their conversation is done. “You saw me struggling?” she laughs. No kiss – at least not one that’s shown.

Marylynn – a contestant involved in drama with the season’s villain, “Queen Victoria,” — tells Abigail that she can’t do this anymore. Abigail asks, “You want a hug? Come here,” and hugs her. Aw.

When Matt calls Abigail’s name in the rose ceremony, she pulls on her ear as she steps down. She used their secret signal! Alas, the camera doesn’t show us his reaction. Did he notice? Did he respond in kind?

The episode ends with a woman (Sarah) almost fainting and the medics being called. And those dreaded three words on the screen: “To be continued…”

As MSN.com says in its episode recap, “Abigail, who melted Matt’s heart in the premiere, has managed to stay clear of the toxicity so far. Viewers saw much less of her on-screen Monday night because she didn’t score an individual date.”

At least we know Abigail is safe for another week!