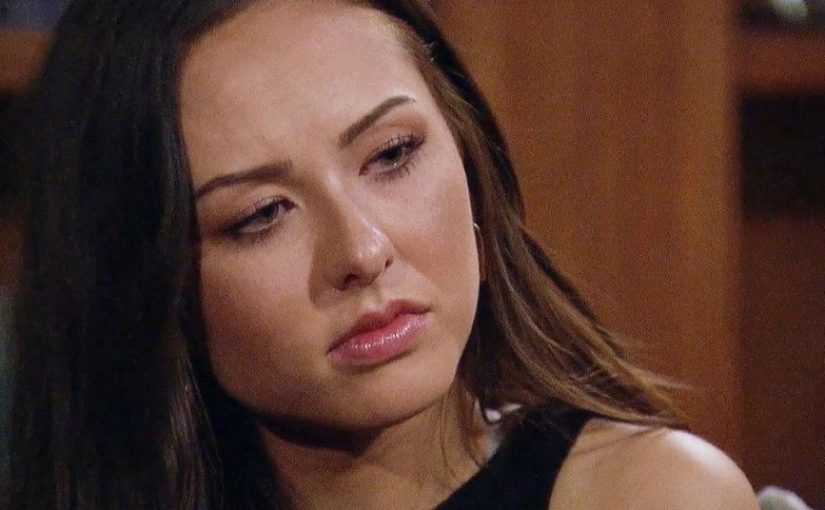 This “dramatic new episode” opens with nature shots. No, not Matt’s bare chest again, but actual footage of the world outdoors.

There’s a divide in the house: the Original Girls (OG) vs. the new ones, or JV vs. Varsity, as coined by MJ. Whatever you call them, the house is tense. Matt addresses the mob mentality and culture of bullying at the start of the Rose Ceremony. “If you’re having to belittle someone else for you to shine, then those aren’t the qualities I’m looking for in my wife,” he says. “It sucks ‘cuz I don’t get enough time with you all, and now I gotta deal with this.”

It’s a tough job, Matt, but someone’s gotta do it.

Needless to say, there’s actually drama in this dramatic episode. Girls are apologizing and backpedaling any negative comments they’ve made. One girl rightly describes the goings-on as “kiss-assery.” Anna — who spread a rumor about Brittany being an escort — is let go. Instead of doing the same with Victoria — the most toxic person in the house (and also the one with the worst fashion sense) – Matt makes us sit through another Rose Ceremony where she doesn’t get a rose. If she can’t figure out how to wear a bra with a dress, it’s no wonder she’s so deluded about her own toxicity.

Rachael gets the first 1:1 date. Abigail is sitting next to her when she finds out. She smiles and looks pleased for Rachael, which is a breath of fresh air after all the drama.

Rachael gets to try on fancy dresses with celebrity stylist Ty Hunter. Meanwhile, the Group Date card arrives and through process of elimination, it’s obvious Kit has the next 1:1. Everyone else is disappointed, including Abigail.

“I’m disappointed, um…I mean…[somber music] I think I’m just getting a little confused,” Abigail says, as Magi puts her arm around her in consolation. “Just, you know, we’re already halfway through this, and…yeah.”

Abigail then tells the camera, “It just kind of makes me question a lot of things, like does he not want that 1:1 time with me? Does he not want to explore that relationship? I don’t know. It’s like reality’s just slapping me in the face right now.”

During Rachael’s evening date, Matt asks why she hasn’t been in love before. Ironically, even though he described her as being super confident, she tells him she doesn’t have a lot of confidence in herself. Rachael is the first to outright tell him she’s completely falling in love with him, and he says he feels the same way. They go for a ride in a horse-drawn carriage, because there’s nothing like smelling animals and manure when you’re on a romantic date.

Group Date on a Farm

But at least Rachael isn’t on the group date that goes to a farm! The producers didn’t even warn the girls to dress appropriately. Abigail’s wearing a white or off-white top – and it’s a rainy day. Even though Matt lives in NYC, he grew up in Raleigh, NC, and on farms so he’s a country boy at heart. He wants to see how doing farm chores will bring out their true selves. Yeah, there’s nothing like shoveling manure, collecting eggs, or milking animals to prove your worth.

MJ catches Matt making out with Pieper, not even secretly, and all the women are insanely jealous. Abigail tells the camera, “It’s definitely settling in that we’re all dating the same guy, and it’s hard to see the other women have that connection with him.”

That evening, Serena C. says she would have had a better outfit if they had said to dress for a farm. Abigail agrees and with a thumbs up, says, “Yeah, my boot got covered. Covered!”

To the camera, a dejected-looking Abigail says, “We’re halfway through this process and I definitely cracked a little bit. I feel like my connection just isn’t as far along as the other girls, so the time that I get I need to make it meaningful. I don’t want to miss, like, a great opportunity to take our relationship to the next level.”

Abigail finally gets serious screen time – in more ways than one. Matt asks what she thought about the day. “My grandparents actually have a farm,” Abigail says. “I’ve never been on it, but I was like, oh, I can finally understand like what my grandparents are going through, but honestly, I was kind of defeated. I know, like, we joke around a lot, like, obviously, like about the group dates and stuff, but…”

“I mean, nothing’s wrong,” she replies. “I think there’s just something about you, like I’m super excited, um, I don’t know. I literally get like the biggest smile on my face when I’m around you, but I also wanna be as open with you through this process. I guess my biggest fear has become that I’m gonna disappoint you. You want a wife and you want a family, and you know I want those things too. But you know if I were to have a family, um, there is a really strong possibility, you know, that…my kids would be deaf. My birth dad did walk out on my mom and my sister right after we got our cochlear implants. In no way do I, you know, view my hearing loss as baggage, but when you have, you know, what should’ve been one of the most important people in your life…[gentle music] you know, walk out, it’s hard not to feel like you know, if I fully open myself up to somebody, are they gonna do the same thing?”

“Can I tell you something?” Matt asks. “I can’t imagine what that’s been like for you, but I can relate to not having a dad growing up and having a single mom who raised me and my older brother. But it’s not something that, like, I’m ashamed of, because…it’s made me who I am, and the things that you’re seeing as a barrier and a roadblock, these are things that I look at you and I admire about you and are encouraging to me about what a future with you would look like. And that’s how I feel about you.”

Matt tells the camera, “It was extremely courageous of Abigail tonight to share that with me. She was extremely vulnerable with me and opened up about things that keep her up at night and some of the things she worries about and ultimately things she would want to share with her husband. I’m looking for someone who’s going to push me, challenge me, and make me a better person, and I think Abigail does that.”

After Abigail rejoins the group, Katie notices her ear-to-ear grin and says, “You look happy. Did you have a good time?” Abigail hunches her shoulders and gives a crinkly nod.

In Matt’s preamble to giving out the Group Date Rose, he says it’s going to someone “who was extremely vulnerable with me tonight.” It’s Abigail! She smiles and brings her hands to her face in pleasant shock.

BLESS ABIGAIL GETTING THE ROSE ON THE GROUP DATE! Well deserved. 👏🏻👏🏻 #TheBachelor #Bachelor

Why Abigail’s Conversation Is Important

I write about this in depth for Hearing Like Me, but as one of Abigail’s longest scenes, it’s an important one. We need more speaking deaf representation, and here’s one in all its glory. Many people don’t realize this, but culturally Deaf people actually want their children to be deaf. Why would I want my kids to go through hardship and struggle? It’s a whole different world today, yes, with cochlear implantation happening at earlier ages. But it still requires work and dedication. You’re still deaf when the cochlear implants are off. You still have to deal with technology and its challenges, and of course all the costs related to that.

All parents should want their kids to have easier and better lives than the previous generation. Ironically, I was so worried about my kids being deaf that I didn’t consider anything else. They’re hearing, but they both have celiac disease, and my daughter has a second autoimmune disease. Those are arguably scarier and health-threatening than being deaf.

At any rate, it’s important for potential spouses/parents to have open communication and discuss possibilities. I had a conversation with my now-husband about the possibility of our kids being deaf. As an engineer, he was focused on logistics. If our kids were deaf, we’d have to move to an area where there was an oral school or program. That was his only concern.

My friends received similar responses from their significant others, who see how independent and successful we are as speaking deaf adults and didn’t think it was a big deal. Of course, we know how much work we and our parents put into it, but at least we’d be experts.

I also have lots of questions about her dad leaving. Why did he leave after Abigail and her sister got cochlear implants, as opposed to when their deafness was diagnosed? I’m sure there’s more to this story.

I hope that Abigail’s deafness isn’t the focus going forward. I get that she had to introduce it in the first episode, and the conversation in this one was necessary. But now the editing shouldn’t single it out. She has a disability, but it’s not her whole identity. Don’t make her into the token deaf girl.

The Rest of the Episode

Now that Abigail has her rose and her big scene, we don’t care about the rest of the episode as much, do we? Kit’s 1:1 is cooking dinner at Matt’s house, which is meaningful to her. She tells him she’s built up so many walls over the years because her mom’s a fashion designer (Cynthia Rowley) and she grew up in the spotlight. Yet she sought the spotlight by being on this show. Whatever, little Miss Rich Girl. You’re only 21 and we don’t need to see tongue when you make out with Matt.

Meanwhile, there’s still one more person in the house who’s adding to the toxicity: MJ. There’s a showdown between her and Jessenia, but we don’t see all of it because the producers want us to come back next week.

By the way, if Abigail doesn’t “win,” she’s one of the fan favorites to be the Bachelorette. Now THAT would be amazing!