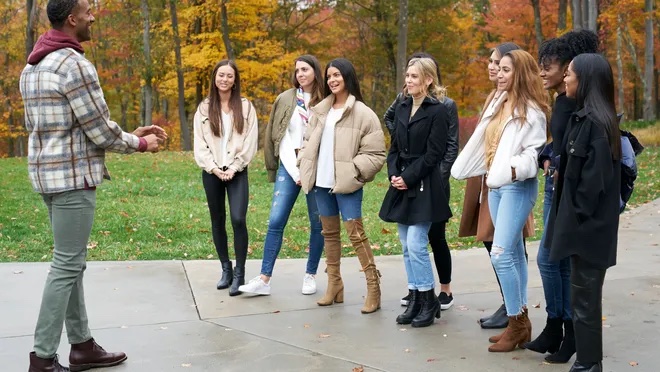 “A shocking new episode of The Bachelor starts right now!”

ABC is known for its hyperbole when it comes to this show. Every episode is shocking or dramatic. But this one actually fits the bill.

Abigail’s group date — which should have aired last week — is finally shown. The evening date with seven women makes me think of a good drinking game. Every time someone says “like” as a sentence filler – not describing how they feel for someone – take a shot! On second thought, don’t. You’ll end up hospitalized!

Matt asks Abigail, who’s outfitted in a classy orange dress, “Up until this point, is this what you thought it would be before you got here?” Abigail responds, “I honestly didn’t think I was going to make it past the first night. Just the fact that, like, you saw me and, like, we hit it off, like, I’m still riding, like, on that high, to be honest.”

Abigail’s hair, by the way, is in a ponytail. I find myself looking for her cochlear implant. Actually, every time she’s on screen, I look to see if she’s showing her CI. A deaf friend shared that she does this too.

At the end of the evening, Matt tells the group there was a lot he liked. He calls out Abigail: “What you shared about what you were looking for, it really resonated with me.” But Chelsea gets the date rose instead.

When Matt says he’s going to leave, he turns around so he’s facing the group when he talks. I think he may have started talking before he turned around. Everyone should be thinking about how to include Abigail; I certainly hope Matt is one of them.

Abigail gives Matt a thumbs up and afterwards, tells the camera, “No, I’m super happy for Chelsea, but it is disappointing. I mean, you want that rose. It means you’re safe until next week. I think it will be intense tomorrow at the Rose Ceremony. Who knows how many people are gonna be sent home. And I just feel like there’s a storm, like, waiting to brew.”

When the women are sitting around during the cocktail part, someone behind Abigail says something. Again, I wonder if Abigail hears and understands.

The Rose Ceremony is shaken up when Chris tells Matt that they had a record response from women who wanted to be on the show when he was announced as the Bachelor. So, because there are more “incredible women” that are dying to meet him and want a shot at falling in love with him, they’re arriving right now.

One of them — Brittany — wants to make up for lost time and immediately makes out with him after she introduces herself. Well, then. Game on.

Naturally, the other women are pissed, frustrated, disrespected, shocked, experiencing PTSD from Night One, you name it. Many still haven’t had much time with Matt, and now they’ll have to fight with these new girls for it. Abigail tells another woman, “And if it’s a small thing like this that shakes me, I’m just like, I don’t know…” Indeed, they’re all rattled.

Thankfully, Abigail — who’s in the back row on the far left again — gets a rose. It’s hard to tell if she does the ear signal; it looks like she’s just tucking her hair behind her ear.

The Date Card says: “Let’s fall in love…” Abigail is on this date, along with three of the new girls. But first, Ben Higgins, former Bachelor, talks with Matt at the house. He’s planned the day, apparently, and will be alongside Matt the whole time. Oh good, I feel so much better now.

It really must be difficult coming up with dates during COVID. This date is an obstacle course called Fall in Love Fest. First, they get in large pumpkin boats and row across the lake to where Matt is. Next, a foot race to Squirreling Around, where they put on a squirrel costume, find an acorn, carry it like a squirrel, walk across a balance beam, drop the acorn in a bucket, and then it’s a foot race to the finish. The winner gets a “very special prize.” Their dignity?

I wonder if Abigail’s CI is waterproof. I sure hope so, because it’s always risky being on or near a large body of water.

Shit is stirred during the after party. Anna says there’s a rumor that Brittany is an escort. They’re both from Chicago and people have gone out of their way to tell Anna to watch out for Brittany, etc. This raises many logistical questions and leads me to think the truth is that a producer fed this to Anna. She directly addresses Brittany, who denies the rumor.

Matt gets to know the women by always stroking their bare thighs during their conversations.

Michelle, one of the new women, gets the 1:1 date. It goes well and they seem like a great match.

But many are wondering why Abigail hasn’t had her 1:1 yet. My friend Eileen is pissed about this. “A lot of other Bachelors and Bachelorettes have given out their First Impression Rose and asked their pick on a one-on-one date very soon afterwards because they were so intrigued by the person and wanted to get to know the person more and see if the connection was really there,” she says. “Three weeks in and Abigail hasn’t gotten her one-on-one yet?? Seriously?? I’m starting to feel like it was ‘props for being the token deaf girl here.'”

Eileen tells me there’s an actual website that has all the First Impression Rose recipients. A lot were eliminated in Weeks 4-8, but some were runner ups. “I guess I just figure if you’re really impressed by someone and their ability to open up, wouldn’t you wanna get to know them more, and not just give them [the First Impression Rose] because they were ‘brave’ or something to talk about being deaf?” She admits she could be reading too much into this, but it’s an annoying, nagging feeling. I agree!

Interestingly, a friend told me today she was reading a blog from a former contestant who said they take a break from the First Impression recipient, but we know Abigail’s one-on-one is coming.

Battle for the Bachelor

There’s an obligatory bare chest scene with Matt working out in the forest. Alas, his shirt is back on when the group shows up. For this group date, Matt tells the women that being physically fit and active is an important part of his lifestyle. So former five-time boxing champion Mia St. John shows up to help train the women to fight each other in front of a live audience. I’ve never heard of her, but the women are all excited. Guess someone is also training them on how to act.

Surprise, surprise, the live audience is just the other women in the house. There’s a real boxing ring, and the women go at it. Eventually, Matt calls the fight because it was getting dangerous instead of about having fun. Like ABC didn’t know what would happen!

Back at the house and during the after party, the women trash the new arrivals. Anna and Victoria in particular have a conversation that’s mostly bleeped out. Katie tries standing up to the bullying unsuccessfully and ends up telling Matt about it. She suggests that he address it in front of everyone the next day. “That someone in the house thinks they’re going to be able to bully their way into my heart, that’s not how it works,” Matt says. “I’m going to get to the bottom of it.”

This tweet is so true! Abigail is normal compared to many of the other women. Clearly, this is why she’s not featured with all the drama. I’m ok with it!